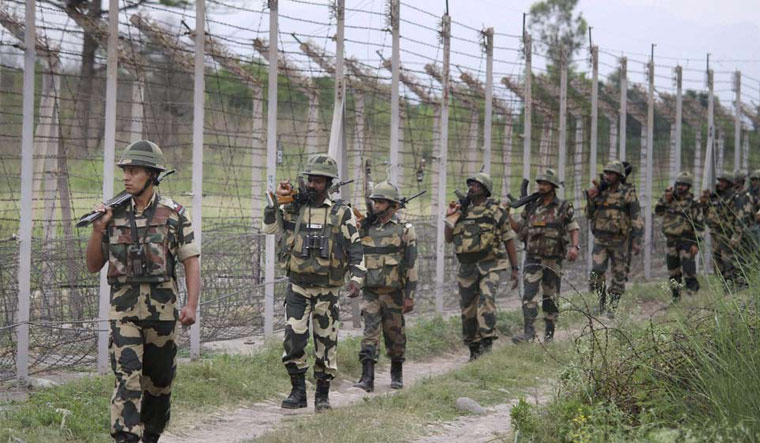 On 25 February, India and Pakistan issued a joint statement agreeing to strictly adhere to their ceasefire agreements of the past. Is this a signal for lasting peace, or yet another formality on the road to disturbances, wonders PRATIK PATNAIK.

THE first book of Genesis of the Bible is akin to a modern commentary on Indo-Pak relations. It tells the story of the twin sons of the aged Isaac and Rebekah, Jacob and Esau. Esau was born before Jacob, who came out holding Esau’s heel as if trying to pull him back into the womb to become the firstborn.

Jacob means he who grasps the heel, which is also a Hebrew idiom for deceptive behaviour. Like the fraternal biblical twins, India and Pakistan were born out of the same geographical entity, with Pakistan clutching undivided India’s Achilles’ heel of separate electorates.

Since their genesis (pun intended), both nations have seldom seen peace with each other, as if to vindicate the biblical narrative of Jacob and Esau, who were entangled in conflicts to the very end.

International Law; a casualty of the conflict

Apart from all loss of life that this conflict has brought upon the two nations, one of its most important casualties has been international law, including principles against the use of force, nuclear proliferation, countermeasures vis-à-vis water treaties, and a host of other principles.

Since the great peace of Westphalia, nation-states have not only been wary of the actual use of force but have also considered the threat of use of force a breach of international peace, albeit with lesser emphasis.

Hidden away in Article 2(4) of the United Nations Charter is a lesser-used, yet most-abused, principle of international law: the principle against the threat of use of force. Article 2(4) says, “All members shall refrain in their international relations from the threat or use of force against the territorial integrity or political independence of any state, or in any other manner inconsistent with the purposes of the United Nations”.

While nation-states are quick to condemn any actual use of force (and rightly so) but the practice of nation-states in calling out the threat of use of force as illegal is scarce. Apart from three wars and one limited war (Kargil conflict), India and Pakistan have been involved in at least three large-scale stand-offs, which is a euphemism for muscle-flexing in the international order parlance.

After the attack on the Indian Parliament, the Vajpayee government carried out Operation Parakram, which involved a large military buildup along the Line of Control (LoC). After the 2008 Mumbai attack, former Prime Minister Manmohan Singh’s government also carried out a similar buildup. The last buildup, still fresh in our memories—it just completed two years—was led by the Modi government after the Pulwama terror attack.

All these stand-offs signal a threat of use of force from both sides, putting the lives of their citizens at the mercy of a hair-trigger.

The international law-making process is typical. International law can be a creation of a treaty (such as the United Nations Charter) as also by customary practice.

Customary international law, in turn, has two elements in its making: (a) State practice, if a custom is widely practiced/abstained from by states; and (b) Opinio Juris, if the states acting on or abstaining from such practice believe it is legally incumbent upon them to act in that manner.

To understand how a treaty, i.e. a UN Charter, bans the threat of use of force, it is pertinent to inquire into the customary law. The USSR amassed troops near the Turkish border in 1946, which was accepted as a credible threat.

In various judgments including the Nicaragua, Corfu Channel, and Nuclear weapons case, the International Court of Justice has considered that military manoeuvres that take place near a State border may amount to a threat of use of force.

Accordingly, it is amply clear that both countries have some part to play (though disproportionate) in breaching the principle against the threat of use of force by the multiple military buildups along the border. The prudence of such actions in an economic world order which gravitates towards peace and stability is questionable. Such actions disrupt the rule of law and result in multiple diplomatic setbacks on the economic and strategic fronts.

The LoC and the Kashmir issue became the Waterloo of many Indian and Pakistani politicians in the past and resulted in distrust and second-guessing of agreements. Formal diplomacy and personal diplomacy—such as when Modi showed up at Prime Minister Nawaz Shareef’s party in late 2014, a.k.a. “Spiderman Diplomacy”—have often resulted in nothing substantial. This has had leaders on either side of the border closing their doors to giving peace a chance.

Is there good news in the offing?

After 2020, when the numbers of ceasefire violations quadrupled compared with 2018, which resulted in the loss of many lives, surprisingly, after the new year, everything went quiet on the western front. Now we learn that Track-II (back-channel) diplomatic meetings were taking place between India and Pakistan at the National Security Advisor level at least for the past three months and that there was at least one physical meeting in an undisclosed neutral country.

On 25 February, quite unexpectedly, India and Pakistan issued a joint statement agreeing to strictly adhere to the ceasefire agreements of the past, a possible oblique reference to the 2003 ceasefire pact. “Both sides agreed for strict observance of all agreements, understandings and cease firing along the Line of Control and all other sectors with effect from midnight 24/25 February 2021,” said the joint statement.

We have seen in the past that ceasefire pacts have a considerable positive impact on the border situation which is demonstrated from the graph below:

Peace for our time?

On his return to London from Germany after meeting Hitler in 1938, British Prime Minister Neville Chamberlain waved a piece of paper and said he has returned with the “peace of our time”.

He was referring to the Munich Agreement and the subsequent Anglo-German declaration on ending aggressive actions by Germany. This phrase is remembered for its irony, as we know what transpired after it.

The book of Genesis tells the story of the reconciliation of Jacob and Esau. By then, Jacob had spent more than 20 years staying with Laban in Padan-Aram. The two brothers prepared for their meeting like combatants about to enter into battle.

Jacob sends his envoys to Esau, as well as gifts meant to mollify him. Jacob crosses over and encounters Esau, who seems initially pleased to see him. Esau refuses the gift at first, but Jacob humbles himself before his brother and presses him to accept it, which he finally does. Later, though a certain amount of distrust remains, the brothers also meet at the funeral of their father, Isaac holding peace in the process.

It is unclear whether the joint statement will become the edifice for lasting peace in South Asia or one more Waterloo.

(Pratik Patnaik is a lawyer based in New Delhi. The views expressed are personal.)