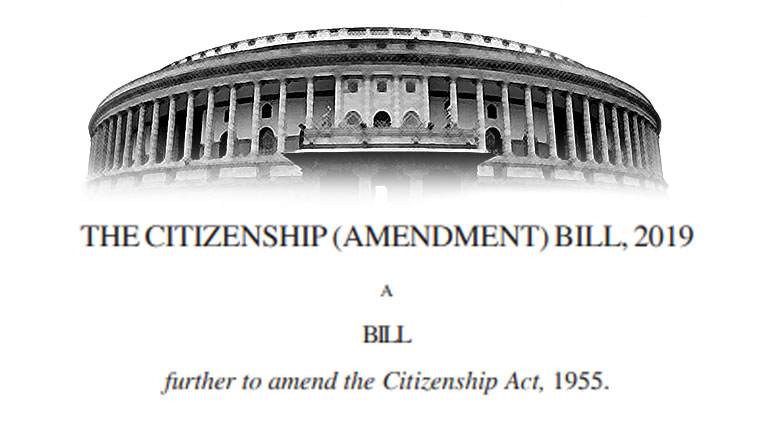 The Citizenship Bill aimed to amend the six-decade-old Citizenship Act, 1955 and would bring two major changes: one, illegal migrants of six religions, namely: Hindu, Sikh, Buddhist, Jain, Parsi and Christians from Afghanistan, Bangladesh and Pakistan will be eligible for citizenship in India, and two, the central government it will have the power to cancel the registration of Overseas Citizen of India (OCI) cardholders if they violate any law.

Union Home Minister Amit Shah who tabled the controversial Bill in the Parliament amid strong protests stated that “bill is not discriminatory against any community”. However, the bill was criticized by the Members of Parliament including, Kapil Sibal, Shashi Tharoor and Asaduddin Owaisi.  They debated that the current Bill betrays the basic structure of Preamble and violates the fundamental structure of the Constitution of India.

The Citizenship (Amendment) Bill, 2019 has been challenged by the Indian Union Muslim League (IUML) in the Supreme Court today. The petition filed under Article 32 challenge the Bill, which is yet to become a law, to be declared unconstitutional for violating Article 14, 15, 21 and the basic structure of the Constitution of India.

Originally introduced in 2016, the Citizenship (Amendment) Bill, 2019 was brought to amend the Citizenship Act, 1955. On Aug 12, 2016, it was referred to a Joint Parliamentary Committee which submitted its report on Jan 07, 2019. The Bill was then introduced and passed in Lok Sabha on Jan 08, 2019, however, it lapsed with the dissolution of the 16th Lok Sabha.

The 2019 Bill lay down provisions on (i) eligibility for citizenship for certain illegal migrants, (ii) consequences of acquiring citizenship, (iii) citizenship by naturalization and (iv) grounds for cancelling OCI registration.

The Bill, as passed in the Parliament, grant citizenship to non-Muslim refugees or illegal migrants who are facing religious persecution in three countries, namely Pakistan, Bangladesh and Afghanistan.

Since the Bill provides differentiation of people on the ground of religion, and thus, violate Article 14 of the Constitution of India which provides for equality before the law to all persons including citizens and foreigners.

The Bill also provides that it will not be applicable on the certain tribal areas of Assam, Meghalaya, Mizoram and Tripura which are included in the Sixth Schedule of the Constitution, and of the tribal areas which lie under the “Inner Line” permit, i.e., Arunachal Pradesh, Mizoram and Nagaland.

The Citizenship Act, 1955 provides for grounds for acquisition and determination of Indian citizenship. It provides that any person who is born in India or have Indian parentage or has resided in India for a period may become a citizen of India.

The Act of 1955, however, prohibit illegal migrants from acquiring Indian citizenship. Section 2 (1)(b) defines illegal migrant as a foreigner who has entered into India without a valid passport or other travel documents, or enters with valid documents but stays beyond the permitted time period. These illegal migrants may be imprisoned or deported under the Foreigners Act, 1946 and the Passport (Entry into India) Act, 1920. The Acts of 1946 and 1920 also empower the central government to regulate the entry, exit and residence of foreigners within India.

The central government in 2015 and 2016, vide two notifications, exempted the Hindus, Sikhs, Buddhists, Jains, Parsis and Christians from Afghanistan, Bangladesh and Pakistan from the illegal migrant provisions of the Acts of 1946 and 1920 if they arrived in India before December 31, 2014.

and further stated that:

However, in their plea, the petitioners stated that they do not have any grievances in granting citizenship to migrants but they are aggrieved by discrimination and unreasonable classification based on religion. They stated that “illegal migrants are class by itself and therefore any law which is applicable to them should be irrespective of any religion, caste or nationality basis”.