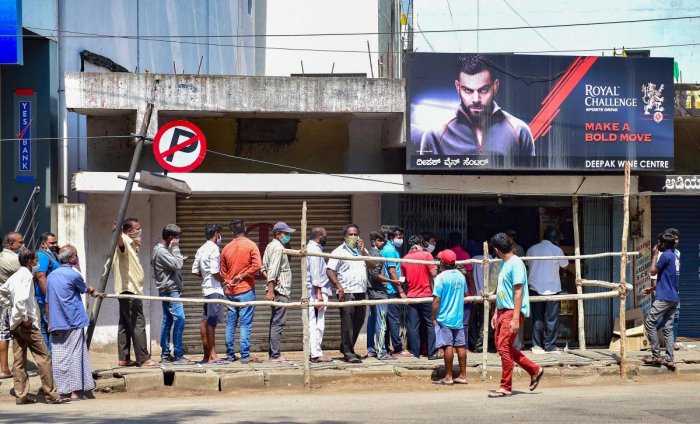 MAY 4 for many was a great day. While lockdown continues, there were quite a few relaxations. Among the opening of shops and relaxation in times to move about, one of the biggest was the opening of liquor shops. In Mumbai, one could witness huge serpentine queues outside most liquor shops. Police were there too. They were inadequate numbers to ensure nothing untoward happened.  People from all walks of life stood their ground braving the sun. No one in the line showed any concern for Corona. They had their mandatory masks, but the distance was not the concern. Their concern was as close as possible to their favourite drink on this auspicious May Day.

Seems this was a phenomenon not only in Mumbai but all over the country. Morning papers the next day, showed huge queues in most cities regardless of the gender, braving it out for their turn. Sales figures as per newspapers were also huge. In UP alone, sales were of 100 Crores on a single day. And imagine. All this, during corona times!

This crowd outside the liquor shops threw all caution to the wind. While there may be spirited celebrations in the near term, a possible rise in infections in future may soon cut short the euphoria. For the sake of those who would risk anything for their want of liquor, one wonders if this could have been done differently at least in times of Corona.

Crowds yesterday have proven beyond a reasonable doubt that liquor runs a common cord among most citizens. Be it poor or rich, male or female. Moot point is then why let people expose themselves to infection. Liquor has become a basic need. Nothing can prove it better than the sales figures and the number of persons outside the shops.

During the lockdown, essential items are getting delivered by e-commerce companies. These include delivering medicines and other daily needs stuff in India. If something people need so badly that they don’t even bother about the possibility of getting infected, then this surely merits listing as an essential commodity. Obviously all process needs to be followed.  In the short term, it will drive the sales and add to states revenues.  In the long term, it will help in controlling the spread of infection.

There are bound to be many doubts regarding this. Some would talk of Indian values and culture which traditionally looked down on drinking as a social event. There will be others who will talk of legal restrictions etc.  Whatever these doubts may be, they all have been set to rest by the enthusiasm shown by the Indians yesterday to get their portions from the nearest wine shops.

Corona times have brought in many changes in day to day life of persons all over the world. One could never dream of working from home at least in government service. Today in corona times most government servants have been mandated to work from home.  Meetings and file work have become virtual with zoom and WhatsApp becoming everyday tool even in government.

So it’s time, cherished desire of millions in India is acceded to. It will help in supporting these bravehearts with their daily needs. And also help rest of the community from not getting infected due to possible spreads from crowds at liquor shops.

Finally, the courier delivered liquor, be it through e-commerce or a phone call to a local shop, will drive up sales, which will not only add cheer to citizens but to State exchequer as well.

Finally, courier delivered liquor, be it through e-commerce or a phone call to a local shop, will drive up sales, which will not only add cheer to citizens but to State exchequer as well.

[Suniit is a computer engineer has an interest in public policy]