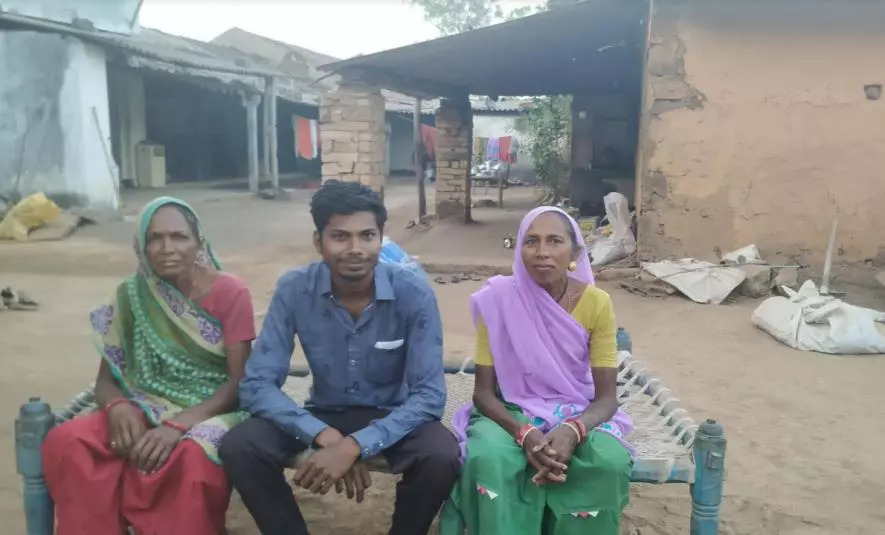 Dayaben Shamjibhai Bariya was 19 years old when she took part in a protest against UltraTech Cement in January 2019. While she was running away from tear-gas smoke she was brutally thrashed by male police personnel leaving her with grievous injuries on her spine and waist.

“Before I could make sense of what was happening I had fallen on the ground, unable to take more blows from his lathi; he kept on hitting me on my back and waist. I don’t for how know as I fainted after a while,” Dayaben, a resident of the village of Nicha Kotda, which falls under Mahuva Taluka in Bhavnagar District, told Newsclick.

“I was bed-ridden and in excruciating pain for about six months. Even after two years I can’t lift heavy objects or do physical work for long stretches,” Dayaben, who works in a local diamond polishing unit now, said.

Back then the protest saw about two thousand farmers from Mahuva and Talaja talukas of Bhavnagar, Gujarat, marching to the mining site at Bhambhor village when police lobbed tear gas and resorted to a lathi-charge. Multiple farmers were injured and jailed following the incident.

The protest came about after the Gujarat government has leased out 8,200 bighas of land from 13 villages in Mahuva and Talaja for limestone mining to UltraTech Cement. Out of the total land acquired by the company more than 90% is agrarian and sustains more than 20,000 farmers. The farmers had been protesting against the takeover since 2016. However, the movement against UltraTech reached its peak in 2018 when the company got a nod from the Union Environment Ministry for mining and began work at Bhambhor, one of the 13 villages.

Labhoben, a 63-year-old woman, a resident of Semtalli village in Talaja, is still healing from the injuries. She was hit on her legs, thighs and her back during the protest. “My legs still ache and it is difficult to work. The police lathis took a toll, says my doctor,” she said.

“I will keep participating in the protests till I am alive and till our land is safe,” she added, however.

65-year-old Khemabhai, Labhoben’s husband, was also thrashed by the police during the same protest. “I could not open my eyes after they lobbed tear gas and fainted after a while,” said Khemabhai, who has had a better recovery than his wife.

Praveen Dhirubhai Shiyal had turned 18 two months before he participated in the protest. He was left with a fractured arm after multiple police personnel thrashed him. Praveen was also the youngest to be arrested by the Bhavnagar police following the protest.

“UltraTech Cement had begun mining in an area in Bhambor village so we decided to gather and march to the mining site and stand in protest. More than two thousand farmers who marched that day were stopped by the police who were present in heavy numbers near the mining site. As we stopped and stood a tear gas shell was hurled at us without any provocation. The farmers were taken aback, it was the first time we had faced a situation like this. The police did not give us time to recover and almost immediately began a lathi-charge,” Bharat Bhil, a farmer who has been leading the protest against UltraTech, told Newsclick.

“More than 40 farmers were injured, including women. Following the protest we were taken to Datha Police Station from where the protesting farmers – including 35 to 40 women – were arrested. Barring those who were grievously injured and who had to be rushed to the hospital, some who were wounded were also arrested,” added Bhil.

According to Pravin Mal, then Superintendent of Police, Bhavnagar, policemen deployed at the mining site were trying to persuade the farmers to return. However, he had told a daily then that farmers turned violent and began pelting stones, injuring a sub-inspector and three constables. The police had to lob 35 tear gas shells and resort to a lathi-charge to control the crowd.

Two cases were lodged following the protest under charges of preventing police from doing their duty, rioting and attempt to murder, among other charges. Notably, 105 farmers from Mahuva and Talaja talukas have been charged with attempt to murder.

“Initially 92 farmers were slapped with charges of attempt to murder and they were arrested for 12 days. Later the Bhavnagar police added 13 more names of those who were seriously injured and had to be hospitalised. The 92 farmers were jailed in Bhavnagar and Amreli,” Bhil claimed.

Among the arrested were four members of Govindbhai Vashiya’s family, a farmer from Talli village in Talaja taluka. Vashiya’s family of 12 members are dependent on the 7.5 bighas of land that had been leased out to UltraTech Cement by the Gujarat government.

“All the members of my family had participated in the protest including my father, mother, aunt and I. When the police began the lathi-charge and lobbing tear gas, we managed to send the children back home. My father was identified by the police and thrashed mercilessly. My mother and aunt were brutally thrashed by male police personnel,” said the 28-year-old Govindbhai, who was also beaten up during the protest.

“We were arrested after being thrashed until we got bail 12 days later. Our children, who were left alone in the house suffered the most during those days. They could not attend school till we were released,” added Nandoben.

“There was no one to feed the cattle or take care of our home; all the adults were arrested,” said 55-year-old Baghiben, Govindbhai’s aunt, who was left with a fracture in her right hand.

“Most of the farmers arrested after the protest were injured, some more seriously than others. However, the Bhavnagar police held us at the police station till former MLA Kanubhai Kalsaria and Leader of Opposition Paresh Dhanani reached the scene. It was only after they threatened to protest alongside us that we were taken to Bhavnagar civil hospital the next day,” added Bhil.

“We got bail twelve days later. Bhavnagar police is yet to file a charge sheet in the matter,” he added. Following the incident, Bharat Bhil, on behalf of the farmers, filed a petition in the Gujarat High Court seeking an independent investigation into the police atrocity. Subsequently, the High Court ordered the CID Crime Unit of Ahmedabad police to investigate the matter. The court also ordered for the formation of an independent committee to asses the impact of mining on local farming in Talaja and Mahuva.