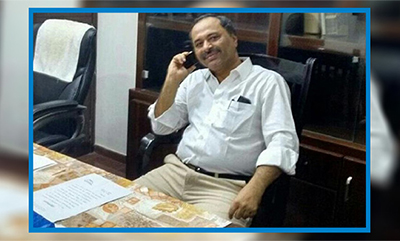 [dropcap]L[/dropcap]awyer turned activist, Ajit Nayak, was hacked to death by unknown assailants in Dandeli, Karnataka’s Uttara Kannada district on this past Friday, July 27, reported The News Minute. He was returning home at 9:30 pm when the assailants attacked him on JN road.

Somakumar, the secretary of Advocate Association Dandeli, which was founded by Ajit Nayak, who was also its president, told The Leaflet on the phone: “We feel that this kind of attack raises suspicion that it was professional work. The circumstance and the way it was executed does not look like an act of vengeance, rather an act carried out by professionals. However, it is too early to say anything. The investigation is on.”

Popular lawyer-activist in #UttaraKannada Ajit Nayak, brutally murdered
Ajit was vocal about a variety of issues, and his death triggered demonstrations in Dandeli, Sirsi and #Karwar #Karnataka@TheLeaflet_in demands free and fair inquiry as his assailants are still at large pic.twitter.com/RyOYcXsSv2

Ajit Nayak was the president and an active campaigner of the Kali Bachao Andolan, a movement to rejuvenate Kali river, that protested against the damming of the river, industries polluting the river and rampant sand-mining on the beds of the river.

Ajit Nayak was the president and an active campaigner of the Kali Bachao Andolan, a movement to rejuvenate Kali river, that protested against the damming of the river, industries polluting the river and rampant sand-mining on the beds of the river

Nayak had previously served as President of the Dandeli Municipal Council. He was the founder and president of the Dandeli Taluk Formation Committee, an agitation for a separate Taluk of Dandeli. As a result of the agitation, the government conceded to the demands and Dandeli Taluk was formed in January 2018. Nayak was also vocal in the implementation of the Real Estate Regulatory Authority reforms in Karnataka and raised various other issues against corruption.

Somakumar further said that the association (Advocates Association, Dandeli) today decided to go on an indefinite strike until the assailants are caught. “We have put a board saying no office will function — as a sign of respect and protest.” The protesting lawyers are demanding the immediate arrest of the assailants. “There should be no laxity on the side of the police,” Somakumar added.

According to The News Minute, assailants have yet not been identified by the police and they are on the lose.

Somakumar remembers Ajit Nayak as a fighter. “He never gave up. He used to take the matters to logical end.”

Demanding the immediate implementation of Advocate’s Protection Bill, Somakumar added, “We take people’s problem and try to fight for justice. A man was so brutally killed. How do we fight for justice when we fear our own lives? We are fighting for peoples cause. In the way we make enemies. If we are not protected from them how will lawyers take the cases to the court and fight for justice for others.” He said that the Act should be immediately implemented and “kick started from Dandeli.” They are planning an agitation with a call “Bengaluru Challo” for the speedy implementation of the Act

Advocates in entire north Karnataka have also started a strong protest against the assassination of Ajit Nayak. According to reports, members of the bar associations in Sirsi and Karwar lodged their protest with many boycotting court proceedings on Saturday.

Brutal killing of activist lawyer Ajit Nayak in Karnataka is a part of attack on rule of law unleashed across the nation. It follows a chain of attacks on human rights defenders including Surendra Gadling . Ajay Nayak was an environmentalist and RTI activist
Punish the offenders

Environment has been butchered. Loss of Ajit Nayak is a loss for all environmentalists, it is an assault on nature itself.
WE MUST NOT REMAIN SILENT. pic.twitter.com/YuvYJDMlws

We stand with you #AjitNayak

The brutal killings of everyone who has a say against the status quo is not acceptable! https://t.co/p1pJSdAmIM