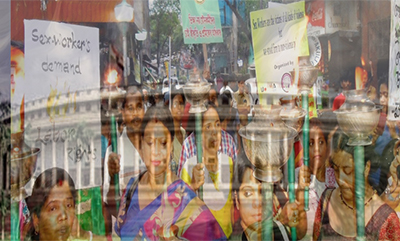 [dropcap]C[/dropcap]ivil society representatives, labour unions, sex workers, activists, legal experts and human rights groups condemn the passage of the Trafficking of Persons (Prevention, Protection and Rehabilitation) Bill, 2018’ (“the Bill”) by the Lok Sabha, without scrutiny and examination, which the Bill desperately needs.

As we have pointed out previously including at a press conference last week, the Bill is replete with problems and adopts a flawed approach towards the problem of trafficking, especially the weak and the marginalized. Many of these problems were alluded to by Members of Parliament, who demanded that the Billbe referred to a Standing Committee in Parliament.

All important and far-reaching Bills in Parliament are referred to a Standing Committee. Why was the Trafficking Bill treated as an exception?The Government’s tearing hurry and avoidance of the Standing Committee shows absolute disregard for democratic processes and parliamentary procedures. It also shows that the Government is not confident of its contents and is afraid that closer examination will expose the pompous claims and rhetoric that has surrounded the Bill.

The Minister claimed that the Bill will make India a world-leader in the fight against human trafficking. This statement is preposterous when seen against the opinion of international experts. The UN Special Rapportueron Trafficking in persons, especially women and children and the UN Special Rapporteur on contemporary forms of slavery, including its causes and consequences, have expressed grave concerns “..about the Bill as presented by the Government to the Indian Parliament on 18 July. Its focus on addressing trafficking from a criminal law perspective is not sufficiently complemented by a human-rights based and victim-centred approach, and this risks further harming already vulnerable individuals”

We are aware that a section of NGOs and influential persons have been lobbying hard for the hurried passage of the Bill. Many of these groups were involved in drafting the Bill, which was otherwise a closed and opaque process. Apart from the preliminary framework introduced in May 2016, no text or draft was made public. Inputs into the Bill were taken on a selective, even partisan basis, with the Government deliberately ignoring the diversity of perspective and experience on the subject. The supporters of the Bill are those who stand to benefit the most from its provisions.

We sincerely appreciate attempts made by Members of the Parliament from the INC, BJD, AITMC, TDP, CPI-(M), YSRCP, RSP and AAP amongst others to rigorously question and raise concerns in the Lok Sabha, which were either brushed aside or sought to cursorily address “in the Rules.” We deprecate the Minister’s decision to not refer the Bill to a Standing Committee and putting it to a hasty vote.

We urge Members of the Rajya Sabha – the Upper House of Parliament, who are known for their wisdom, insights and resilience to ensure that the Bill is examined and evaluated carefully and not hastily passed into law.

Also read: #AntiTraffickingBill2018: UNOHCHR statement reiterates what human rights activists and sex workers have been saying all along

[WATCH] Press Conference on the “Trafficking of Persons (Prevention, Protection and Rehabilitation) Bill, 2018”